One hundred and fifty years ago, Ulysses S. Grant signed a law making Yellowstone the world’s first national park. “For the Benefit & Enjoyment of the People” is what the words say, inscribed on the top of the arch on the immense Roosevelt Gate leading into the park’s north entrance. The gate is an inspiring structure, but I’ve always felt like the monument’s inscription is a bit of an understatement for what the park really represents.

Yellowstone and the entire Greater Yellowstone Ecosystem embody the country’s wilderness. The scant roads that incise the park’s interior merely give us a glimpse of the wildness that hides beyond all we can see. On the worst days, a beautiful landscape unfurls as far as the eye can see. Low hills peppered with evergreens and the occasional aspen grove give way to higher mountains that still have snow even as late as the end of May. Below the hills, water cuts draw draws turn into creeks, and creeks turn into rivers as the water that falls on the park and pulled by gravity, cuts and cleaves its way across the landscape, ever-shaping the land.

Over time, the creeks and rivers create large valleys whose deep soils grow the grass and forbs that sustain ungulate biomass that rivals any you’ll see in the lower 48 states, much less the rest of the world. While the migration is relatively short, a migration exists here nonetheless. As the spring thaw commences and the snow wanes from the valleys, temporarily displaced herds of bison, elk, and pronghorns come to greener pastures to graze and give birth to a new crop of offspring that will ultimately populate these hills and valleys. 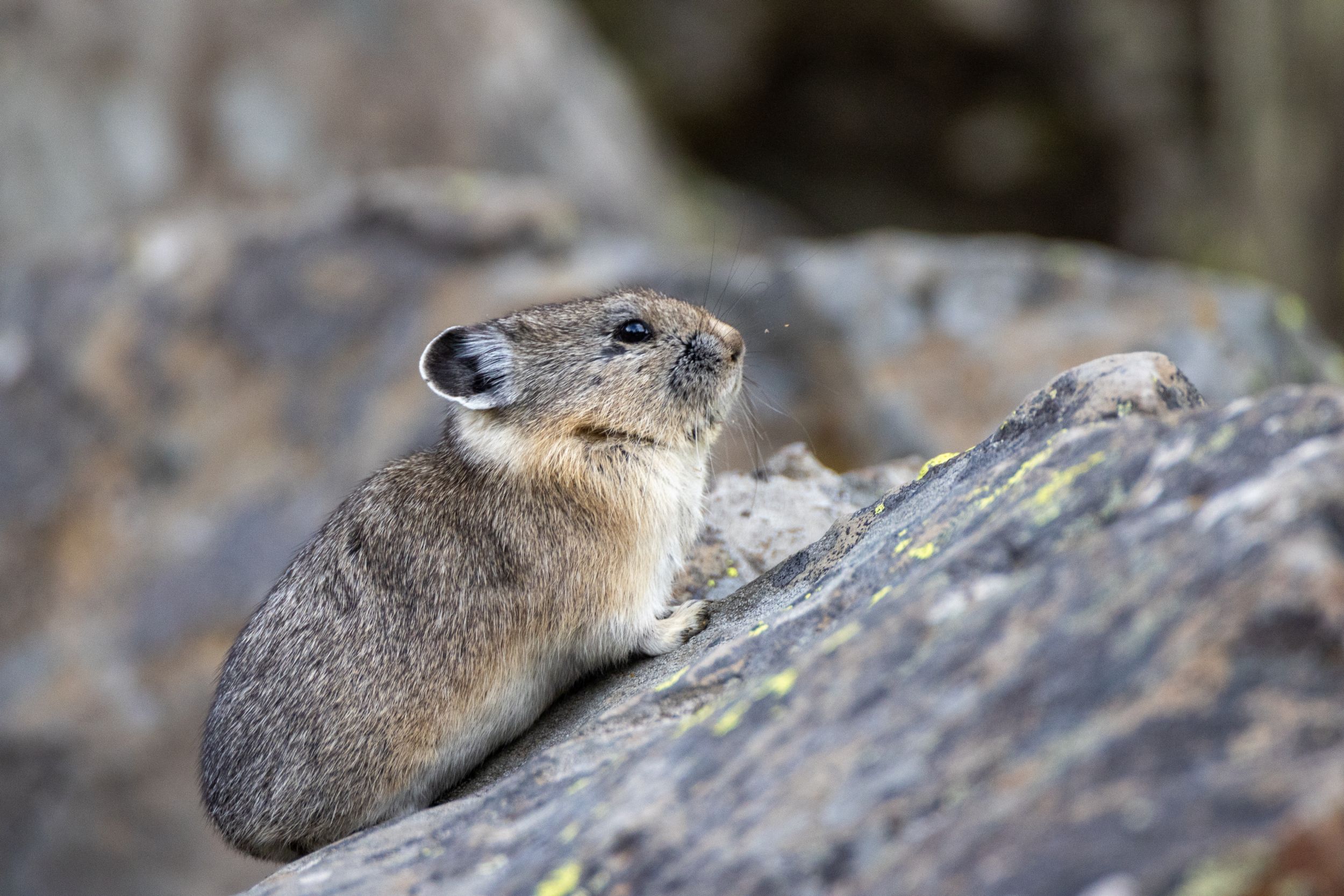 Yellowstone is a veritable menagerie. The pristine habitat of Yellowstone National Park is peppered with species like marmots, ground squirrels, pika, badgers, and a host of bird species. Each species occupies its own ecological niche – a link in a complex yet complete food chain if you will. These species collectively provide a bounty for the numerous prey species that exist here.

The Yellowstone ecosystem is unrivaled in the number and density of predators who prey on the more bountiful animals. Wolves, of course, are omnipresent year around. As the vernal season opens, bears emerge from a winter’s slumber, ever-present coyotes slink through the sage, and bald and golden eagles soar overhead. Those are the common predators. Present but less commonly seen are mountain lions, bobcats, wolverines, pine martens, weasels, lynx, and a handful of other predators.

Backcountry Journeys’ Yellowstone Wildlife Safari tours are formulaic: each day is spent looking in the most logical places for wildlife. While wolves are the ultimate prize, we search in earnest for just about any species of wildlife we can find. Bison and elk are typically easy to find. In fact, on the first morning, we photograph a couple of mature bull elk picking their way through a sage flat – their antlers adorned with velveteen covering in which growing antlers sport. The tiny hairs on the antlers pick up the backlit sun and make the spongy appendages shine. While the antlers are only half-grown, a few more months and they’ll harden just in time for the fall rut and the enviable combat that ensues between rival males. 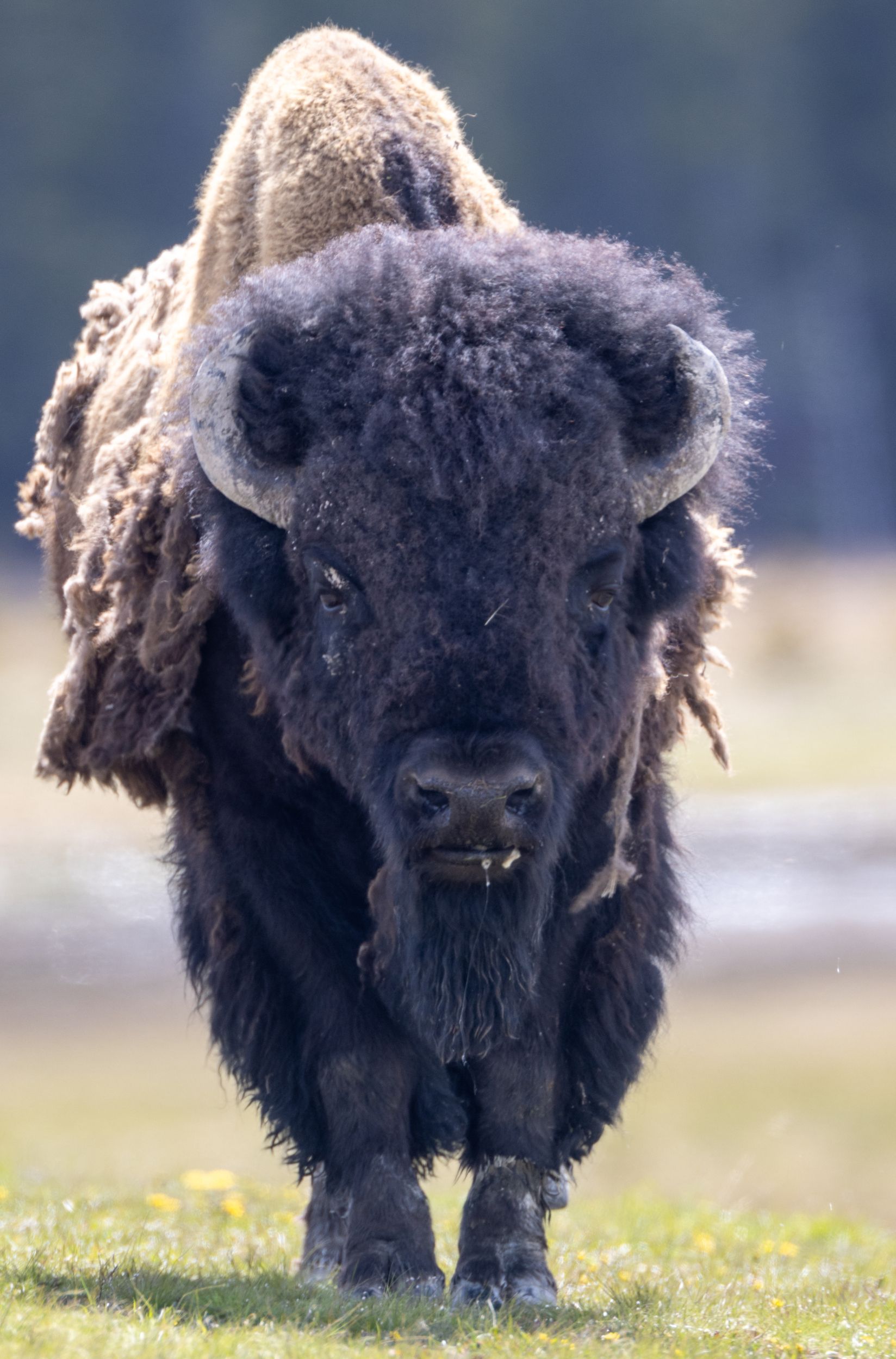 Shortly after the elk, we find a herd of bison bulls feeding alongside the Gibbon River. Like the elk, the bull bison congregate in bachelor groups this time of year. It’s not until the calves are born (and the bison cows are back in season) that the bulls pay attention to the females who roam the park. 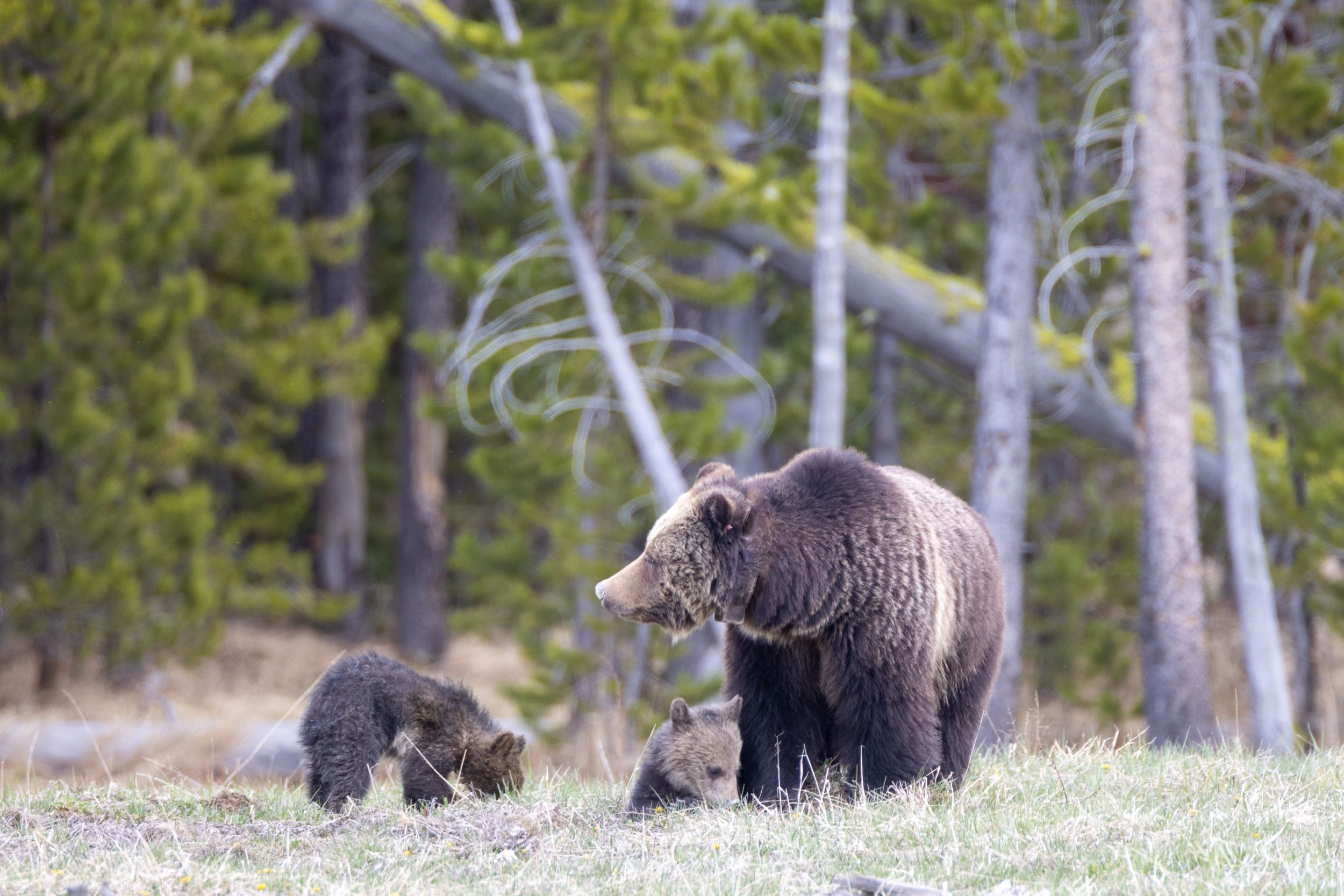 At some point on the first day of the trip, we stumble upon a grizzly sow and her two cubs. The find wasn’t accidental, however. Information gathered from various sources indicated when and where she may be, and like clockwork, the trio is a scant 100 yards away.
It’s fun to watch. While the mother digs in the dirt and turns over rocks in search of food, the cubs mimic her antics. They may not realize it, but she’s teaching them how to survive in an inhospitable world. 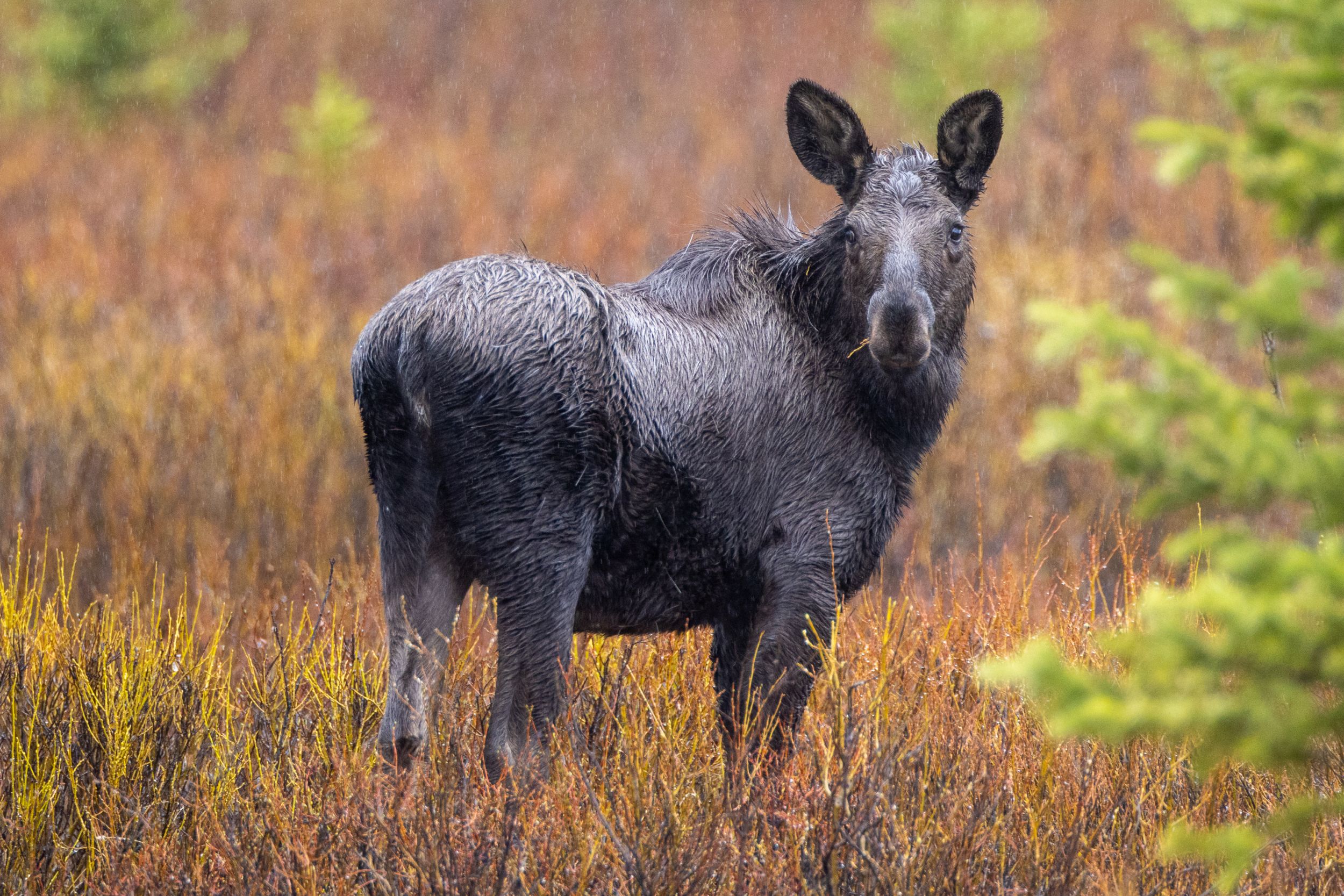 The natural world is constantly churning in Yellowstone. As a mother bear engrains survival lessons in her cubs, a moose browses on sedge in a damp bog across the park. Meanwhile, pika skit in and out of the rocks in such a way that it looks like a rudimentary game of whack-a-mole. Across the valley, a Unita ground squirrel feeds while keeping one eye out for trouble. Just across the sage, that ‘trouble’ is in search of food and goes by the name of red fox. 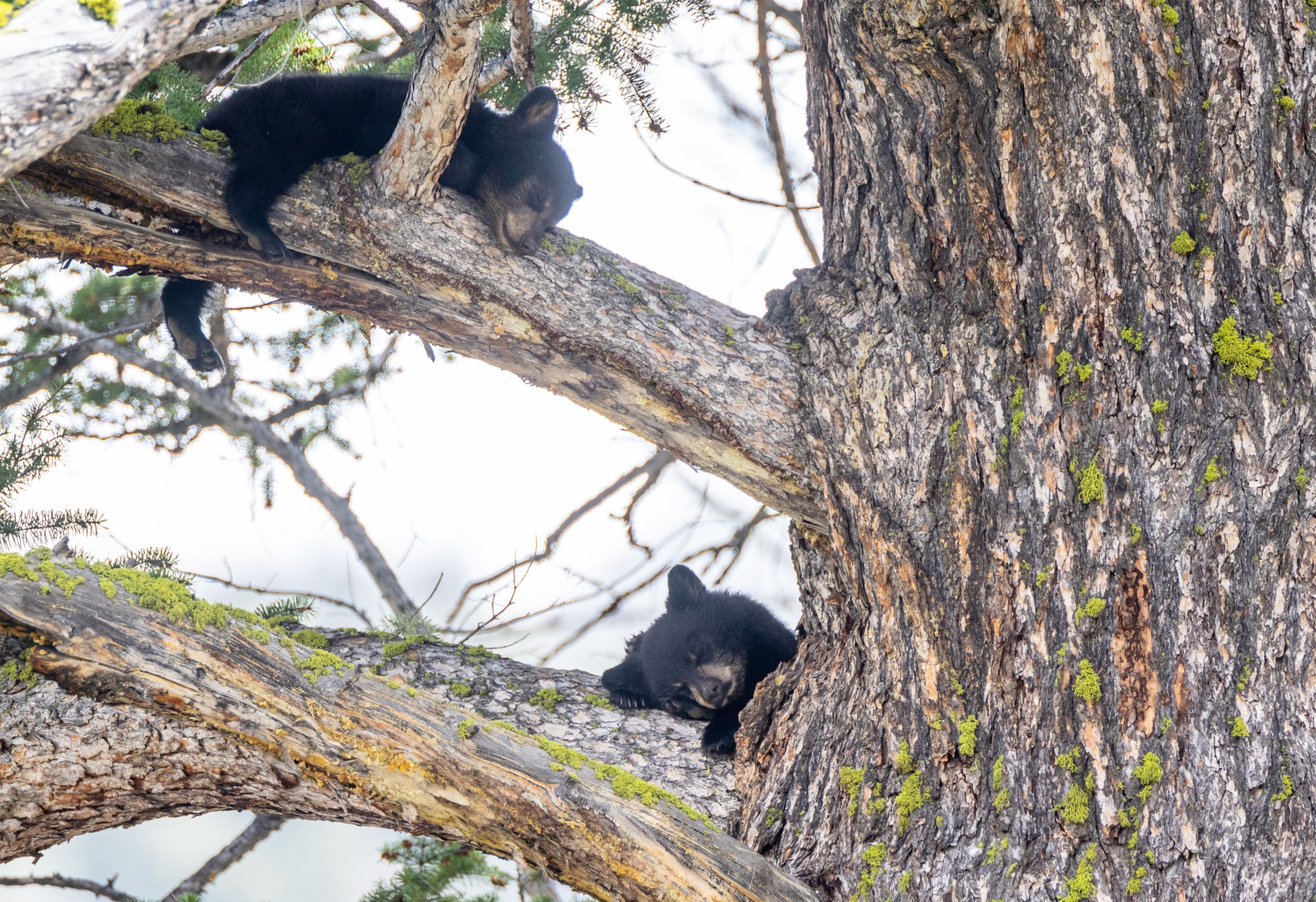 Most precociously, two tiny black bear cubs slumber peacefully in a pine tree while their mother feeds beneath.
Acre by acre and species by species, an ongoing natural drama plays out for those willing to travel afield and bear witness. On the Yellowstone Wildlife Safari, entire days are spent searching for wildlife and their ensuing struggles to survive the wilderness. Because of the pristine habitat, however, most of the wildlife thrives. 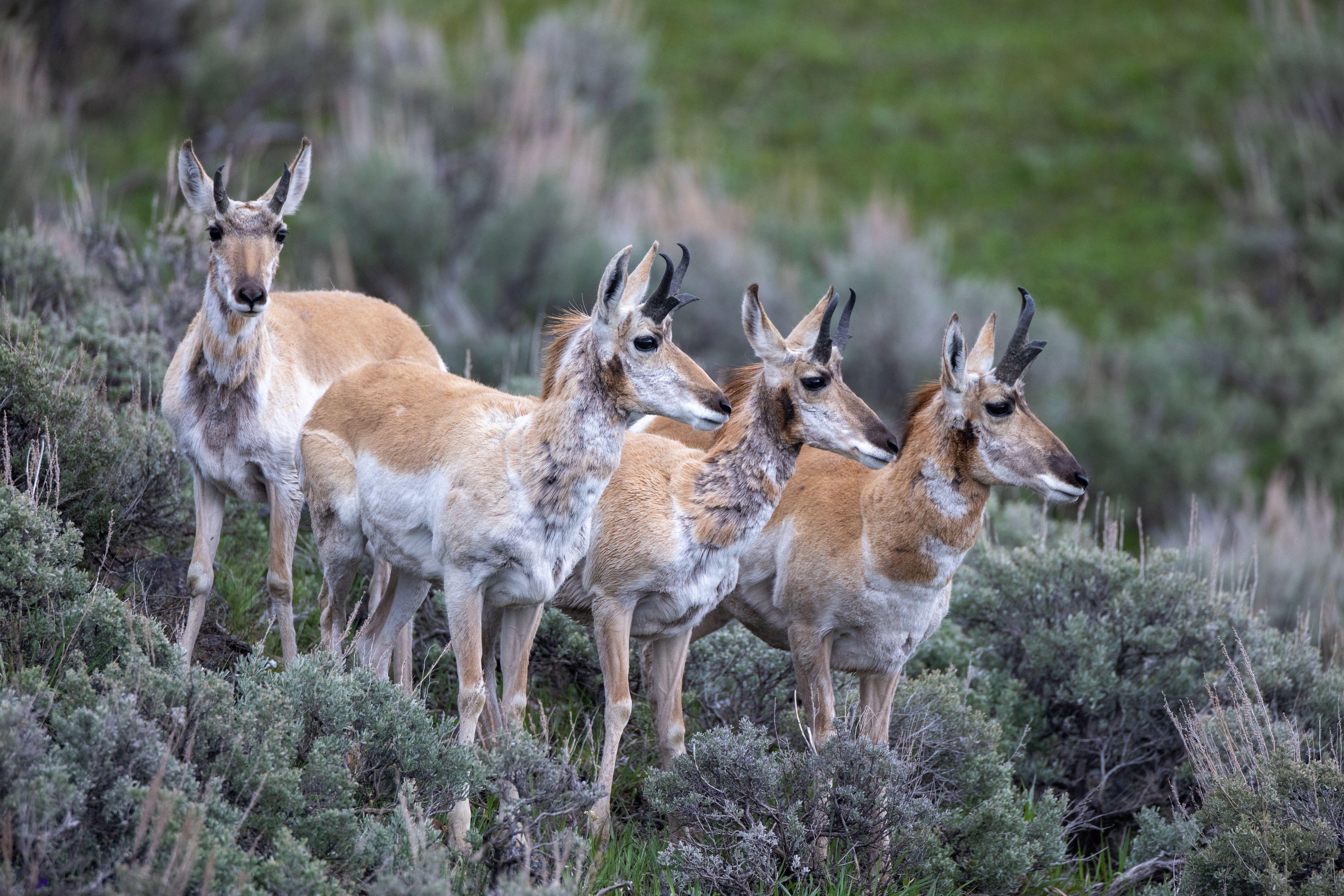 On any given foray, we may see marmot, grizzly bears, bighorn sheep, and a plethora of others. Patience and perseverance paid off each day of the trip as we took thousands of wildlife images in Yellowstone. Northwestern Wyoming is truly a photographer’s paradise.
Like all trips, this one eventually comes to an end. But not before a new group of friends came together to photograph the wildlife in one of the most outstanding locations you’ll find. While images are important, joyous connections people make with one another are just as meaningful. We got plenty of that, too.
Ultimately, picking one outstanding moment on a trip like this is hard. That isn’t a negative statement; on the contrary. It was all good. From the moment we left our meeting hotel in Bozeman until we returned at the trip’s end, it was all filled with good friendships, lively conversation, and one incredible wildlife encounter after another. Russell Graves
If you’ve read any Texas-based magazines over the past twenty-five years chances are you’ve seen some of Russell’s photos or read some of his words.  Since 1989, he has been traveling the state telling authentic Texas stories with his camera and his words – both written and spoken.

A graduate of Dodd City High School and East Texas State University, Russell was an ag science teacher in Childress, Texas for 16 years where he was named Texas Agriscience Teacher of the Year on three occasions.
After leaving that career in 2009, he continued to photograph, write, and speak about his experiences and the people he meets, and in 2010, he began delving into television production.  His first documentary film, Bois d’Arc Goodbye was filmed entirely in Fannin County and chronicled his and his brother Bubba’s canoe journey as they traversed the creek before a lake forever changes the landscape.  The film aired three times to a prime-time, national audience.

Recently he’s worked with such celebrities as the Robertson Family from the Duck Dynasty television show, T. Boone Pickens, Dale Earnhardt Jr., Pat Green, and Tracy Lawrence,  but he insists that regular people are his favorite subjects.
Currently, Russell lives in the country north of Childress, Texas with his wife Kristy and their two children Bailee and Ryan but still manages to spend a considerable amount of time near his boyhood home north of Dodd City.
You can see Russell’s work and portfolio on his webpage at www.russellgraves.com