arrow_drop_down_circle
Divider Text
BCJ Blog, Trip Reports & Latest News!
Trip Report: Tortuguero National Park – January 2022
by Ben Blankenship
A few years ago, when Backcountry Journeys (BCJ) announced the addition of a Costa Rica extension to Tortuguero National Park, I couldn’t have been more excited. I had long dreamt of visiting this park but had not yet had the chance. All of my prior Costa Rica experience had been on the Pacific coast of the country. And though Costa Rica is only 75 miles wide at its narrowest point, the two coasts could not be more different. Culturally, the east coast has Caribbean and afro influences. The cuisines differ greatly, and there are different species on each coast that do not venture across to the other side. Specifically, one species resides only in the far northeast of the country, one that I was desperate to see and photograph, the critically endangered great green macaw, or in Spanish, the Lapa Verde.

Historically, Tortuguero holds a special place in the story of Costa Rica’s green revolution. It was here in the mid-1970s, that then-president Daniel Oduber witnessed a horror that inspired him to designate Tortuguero as Costa Rica’s first national park. While on a visit there with a local conservationist and biologist, Oduber observed a green sea turtle crawling along the beach, presumably to dig a nest and lay her eggs. But, something was wrong. Her gait was labored, and she was trailing something behind her. As they approached, he saw that she was dropping her eggs on the beach as she went, a sure death sentence for the eggs. It was then they saw that her entire lower carapace (shell) had been removed by a poacher. The poacher must’ve chucked her back into the sea after cutting away her bottom shell, unconcerned about the turtle’s suffering. The lower carapace was to be used in soup, and the mutilated turtle was destined to die a slow death. This horrendous sight so moved Oduber that he declared that these prolific nesting beaches would be set aside and protected so that the sea turtles could nest here in peace. 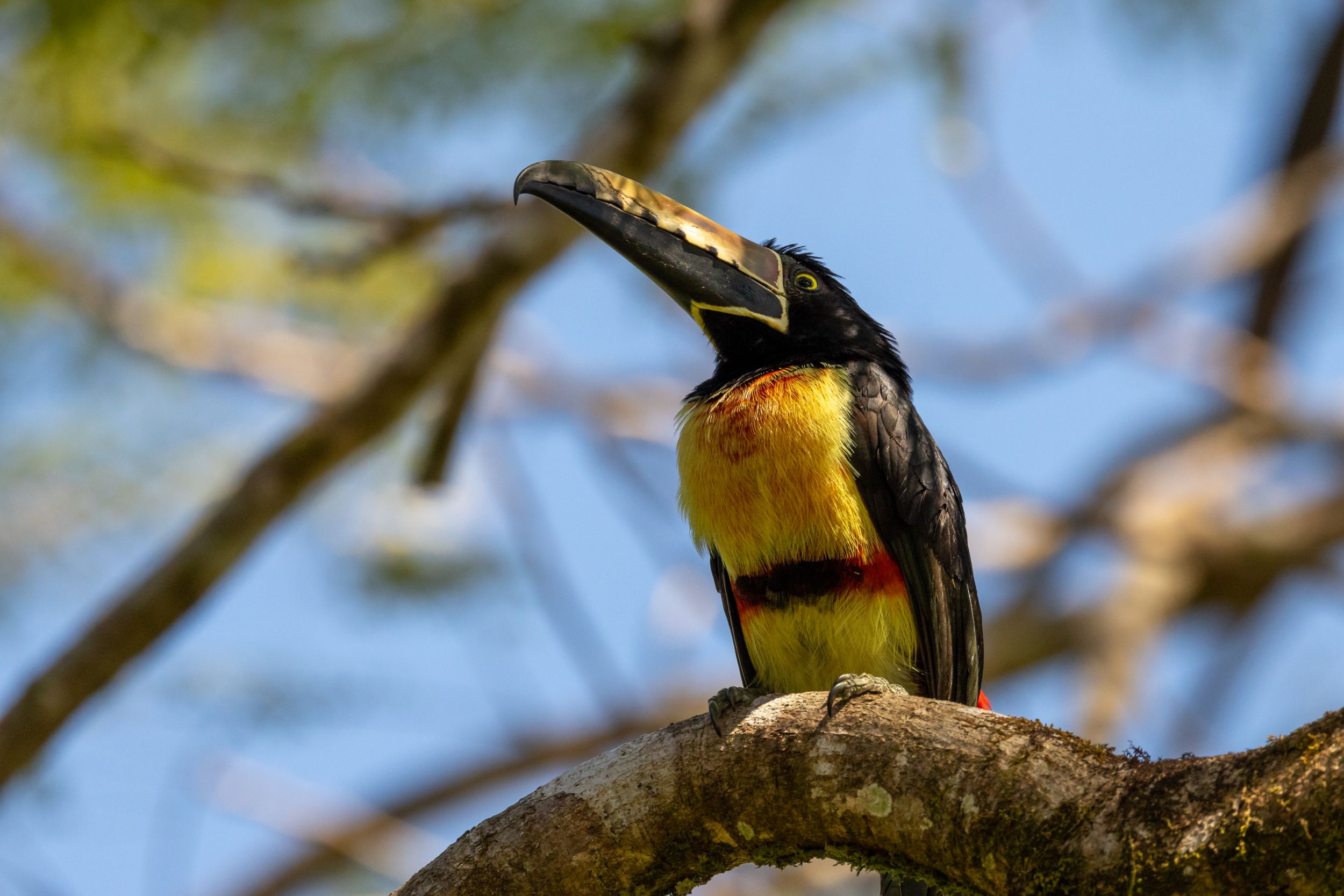 In the time since this move by President Oduber would prove to be revolutionary. By the end of the 20th century, over 25% of Costa Rica’s landmass was set aside and protected as national parks and wildlife preserves. This created a haven for the remarkable wildlife that resides here, which in turn fostered a new industry in Costa Rica: ecotourism. Now, ecotourism accounts for over 20% of the country’s entire GDP and provides countless jobs for Costa Ricans. 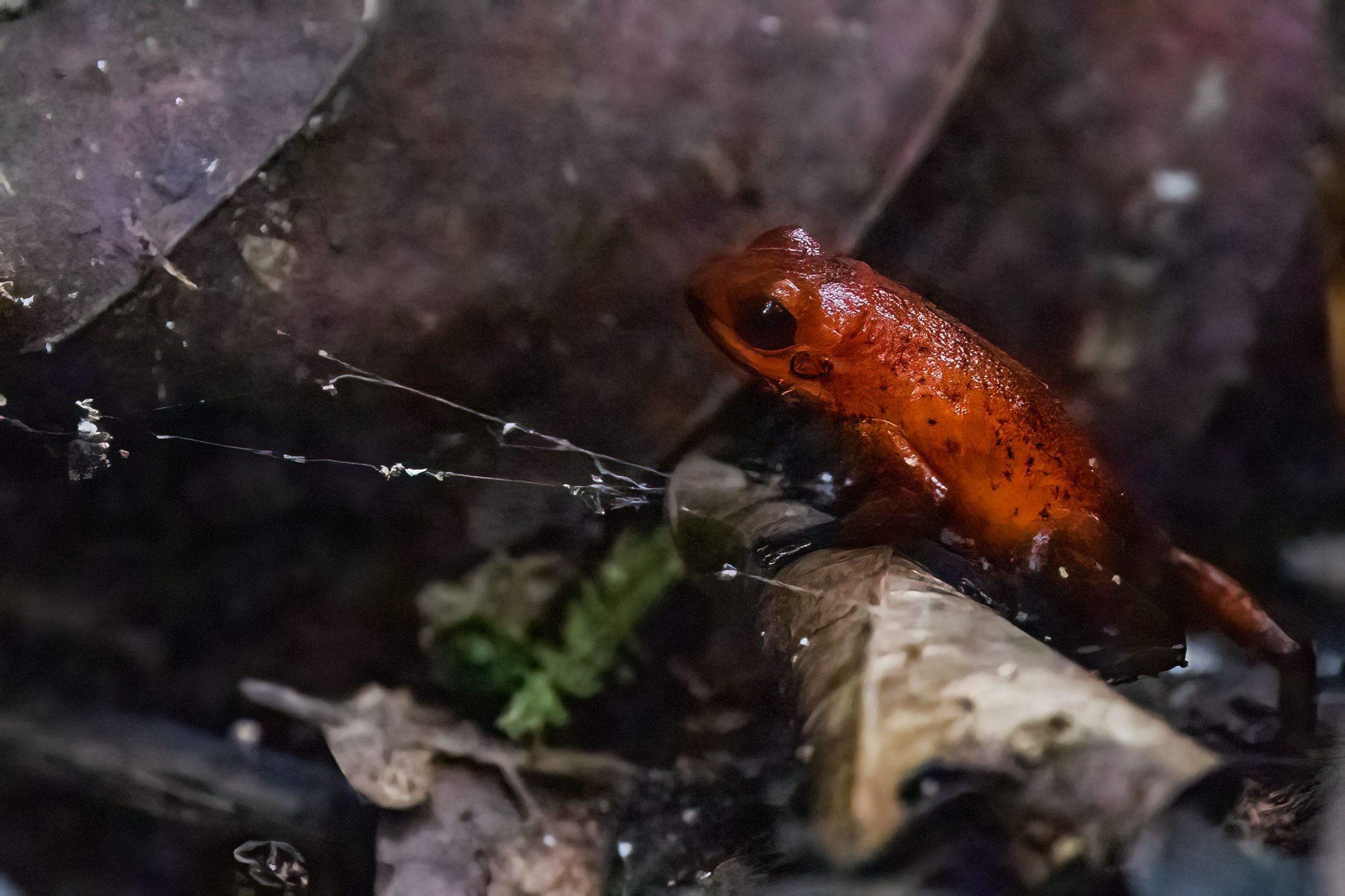 Since its initial designation as a National Park, Tortuguero has been expanded to include the network of canals, islands, and jungles that lie just beyond the beach. It has become one of the most desirable locations to visit on Costa Rica’s Caribbean coast for visitors wishing to experience breathtaking biodiversity. And it has also become a haven for my favorite bird, the endangered great green macaw. 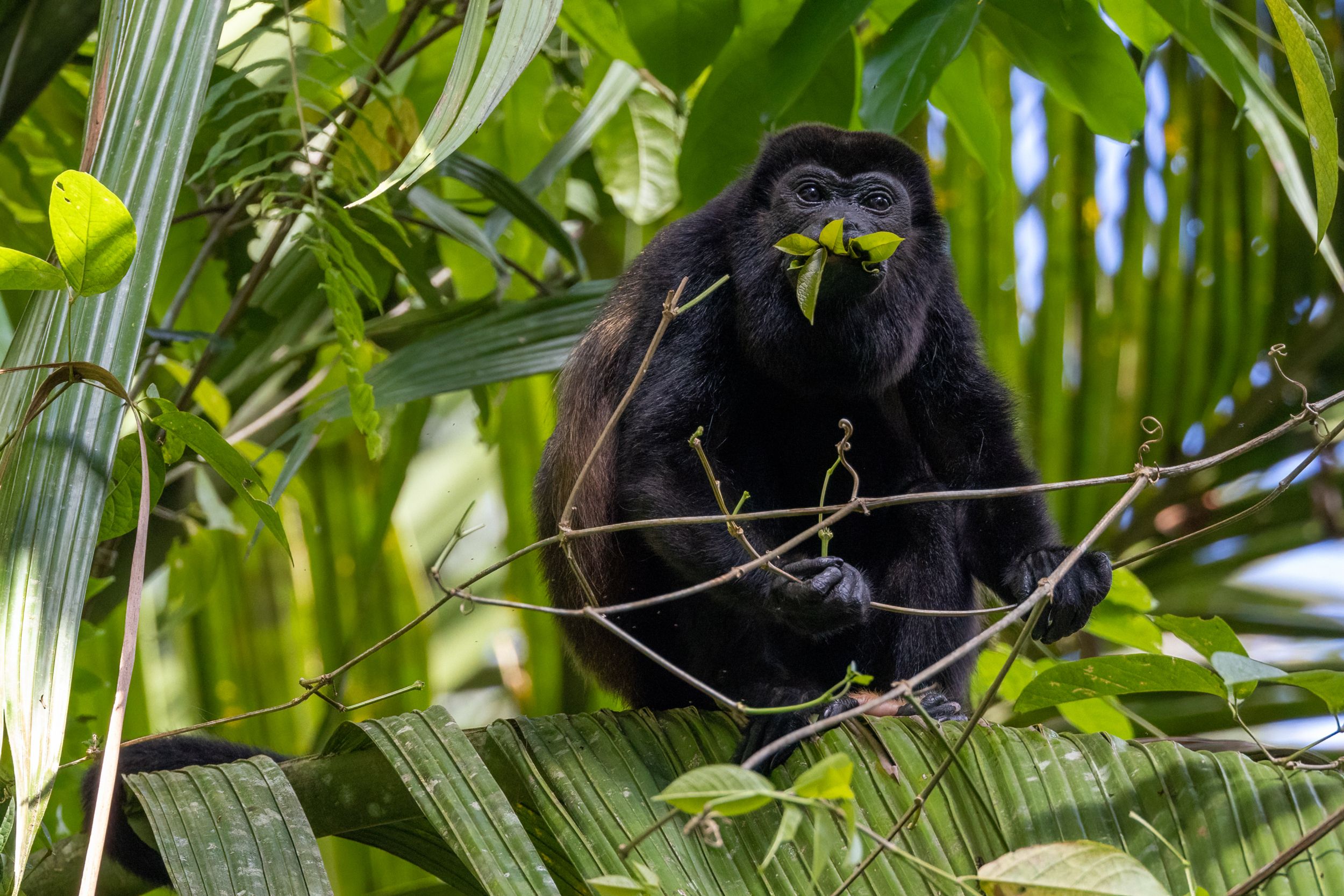 For lucky clients who choose to travel here with BCJ, they have the incomparable experience of exploring its maze of jungle canals by boat to photograph a stunning array of wildlife, from parrots and macaws to monkeys, sloths, hundreds of bird species, and giant crocodiles. It is a place bustling with wildlife.
We base our tour out of the gorgeous Tortuga Lodge, which is accessible only by boat from the small airstrip that sits across Rio Tortuguero. Each morning before breakfast, we set out in a small boat, cruising close to the bank and scanning the tree tops for anything moving. By 9 a.m., we headed back to the lodge for a delicious Costa Rican-style breakfast. 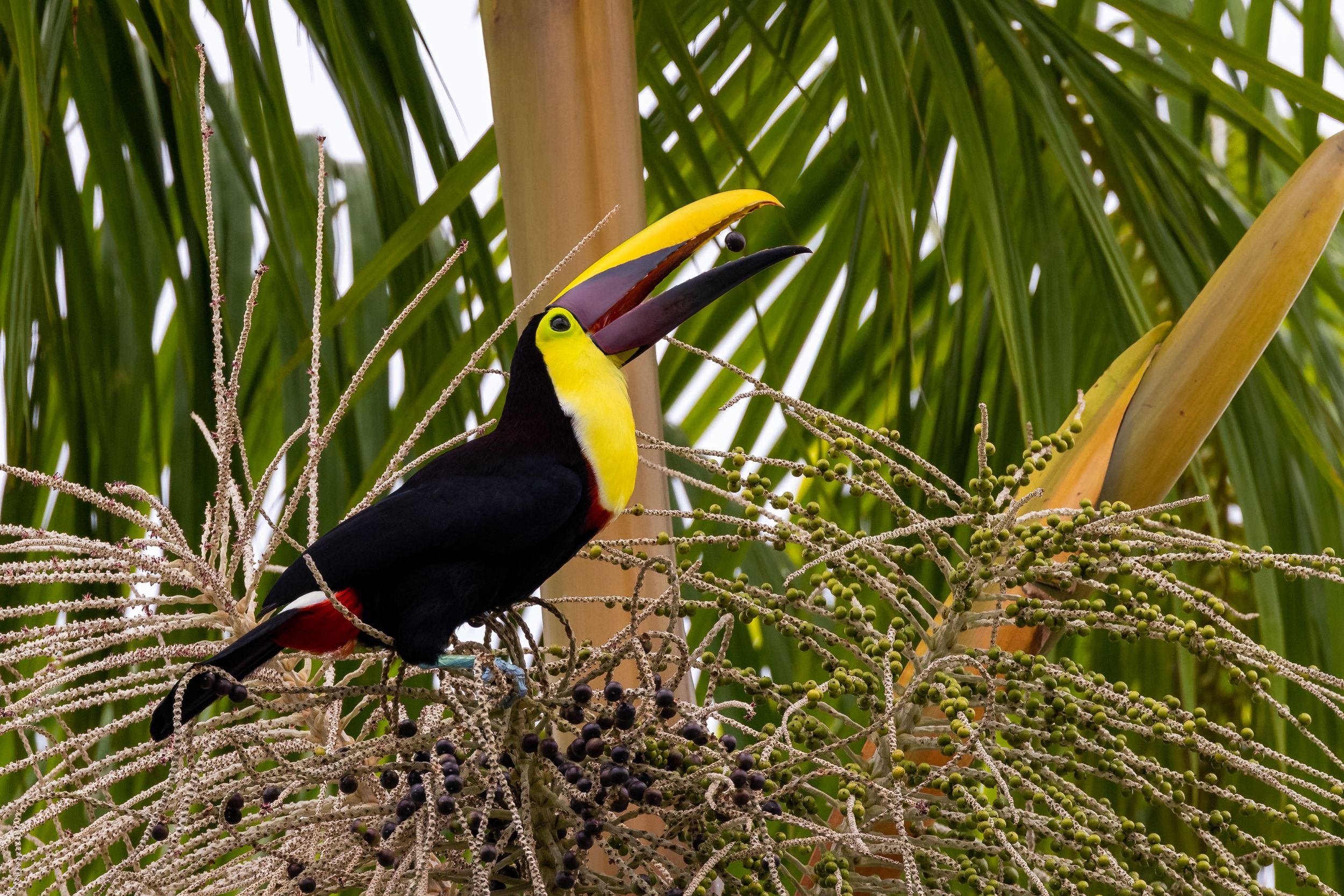 We spent the mid-morning hours exploring the jungle just around the park, finding dozens of toucans, aracari, spider monkeys, and adorable strawberry poison dart frogs. After lunch, we headed back out by boat to continue our aquatic quest for photographic opportunities. Each day ended at sunset when we were dropped off back at the docks of Tortuga Lodge in time to enjoy some legitimate gourmet local fare. 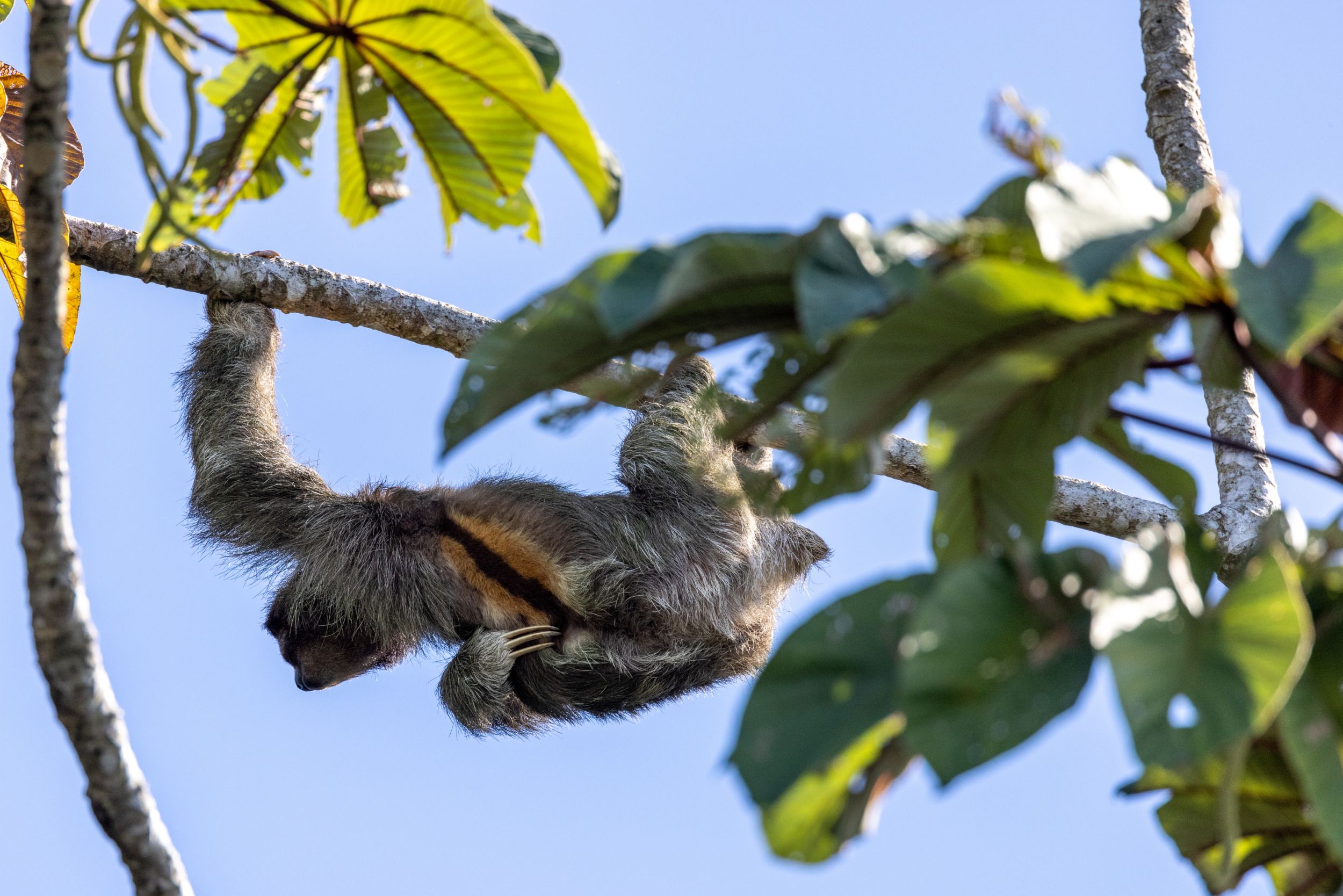 Tortuguero is one of the best locations to see sloths. They love to hang in the mangroves and other trees just at the rivers’ edges. Why they love this area is most likely due to access to the sunlight, to help warm their bodies. Their metabolisms are so slow, that they depend upon the sun to help regulate their body temperature. 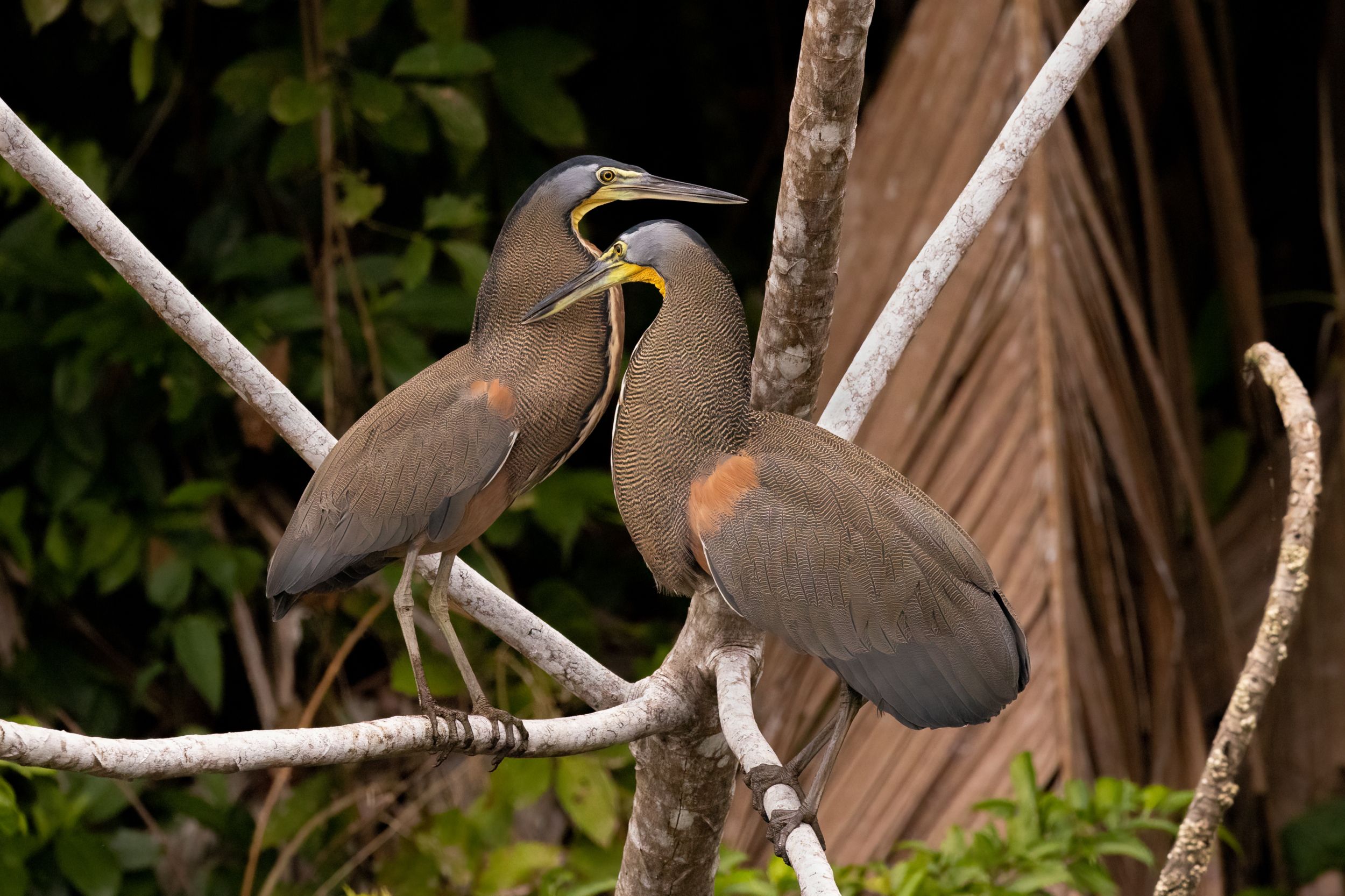 Marine birds reside here in enormous abundance as well, species like tiger heron, little blue heron, anhinga, snowy egret, and even the extremely rare agami heron. Other species that are regularly sighted are the kingfishers. I think we encountered at least four different species of kingfisher during our four days here, the Amazon, the ringed, the green, and a new species for me, the American pygmy kingfisher. 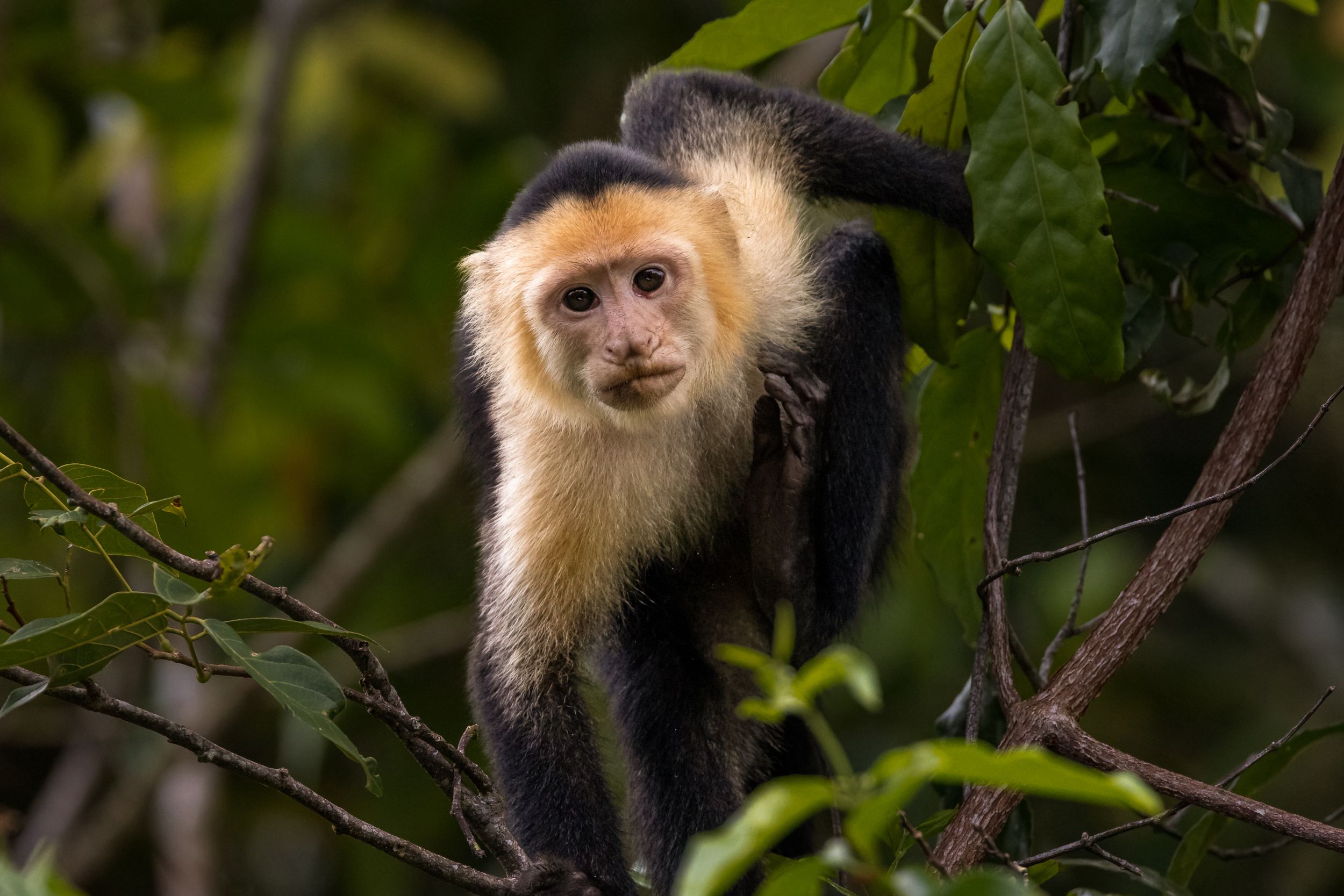 Encounters with these masters of the canopy were plentiful and we had a great time trying to track their acrobatics through the tree branches. Of the reptiles we encountered, amongst them were the spectacled caiman, the American crocodile, and the emerald basilisk, also known as the Jesus Christ lizard for their ability to run across the surface of the water. But for me, the most exciting quarry was the one I had dreamt of finding here during my first visit, the Great green macaw. On the Osa, where I live, scarlet macaws are as plentiful as ravens in Yellowstone. But, none of the greens reside there. So, I made it no secret that I was after the great green from the beginning. And we would find them one evening as they congregated in the beach almond trees and fed on their favorite food. 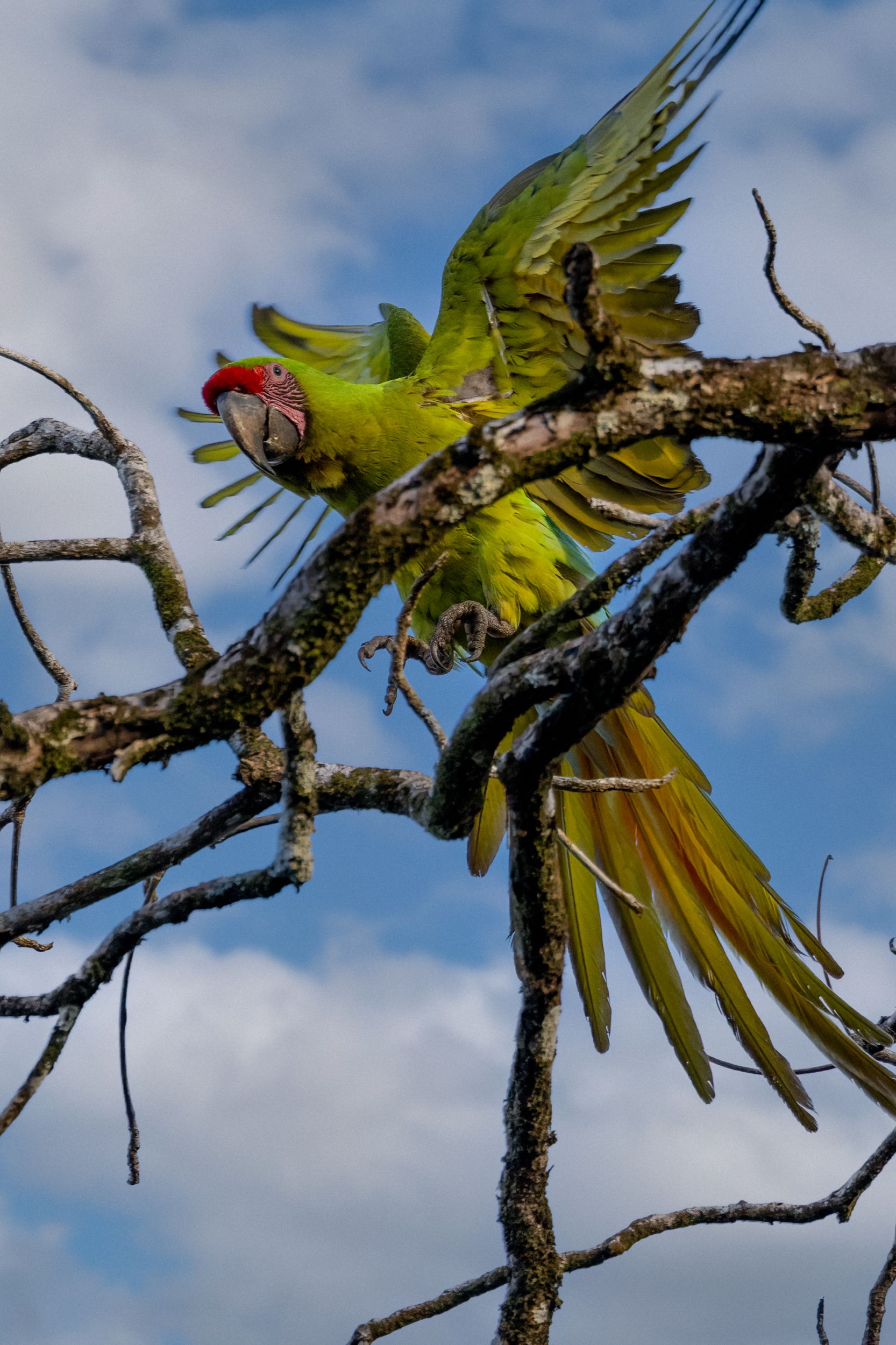 These noisy, raucous birds are often located by ear before spotting them. So, by following their call, we tracked down several groups feeding in the trees just before sunset on the third day. What sticks out in my mind as far as the difference between scarlet and green macaws is how the greens are actually quite camouflaged by comparison. They are an iridescent green, but amongst the lush canopy, they blend in quite well with the green foliage, whereas the scarlets stick out like red Christmas balls. 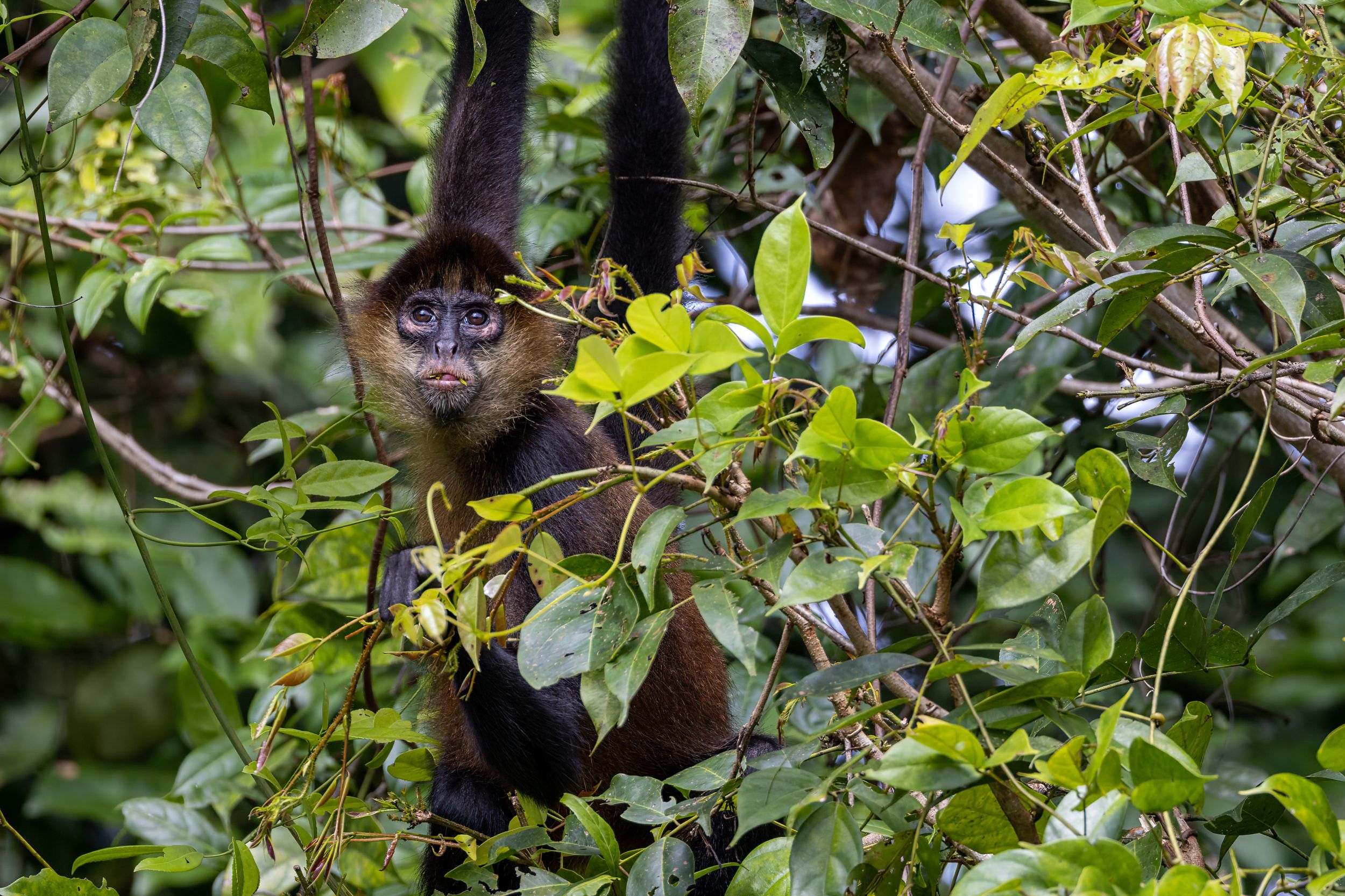 This January’s departure was marked by some incredible weather and unforgettable wildlife encounters, all while enjoying the company of three incredible clients, some new and some old faces I knew quite well. 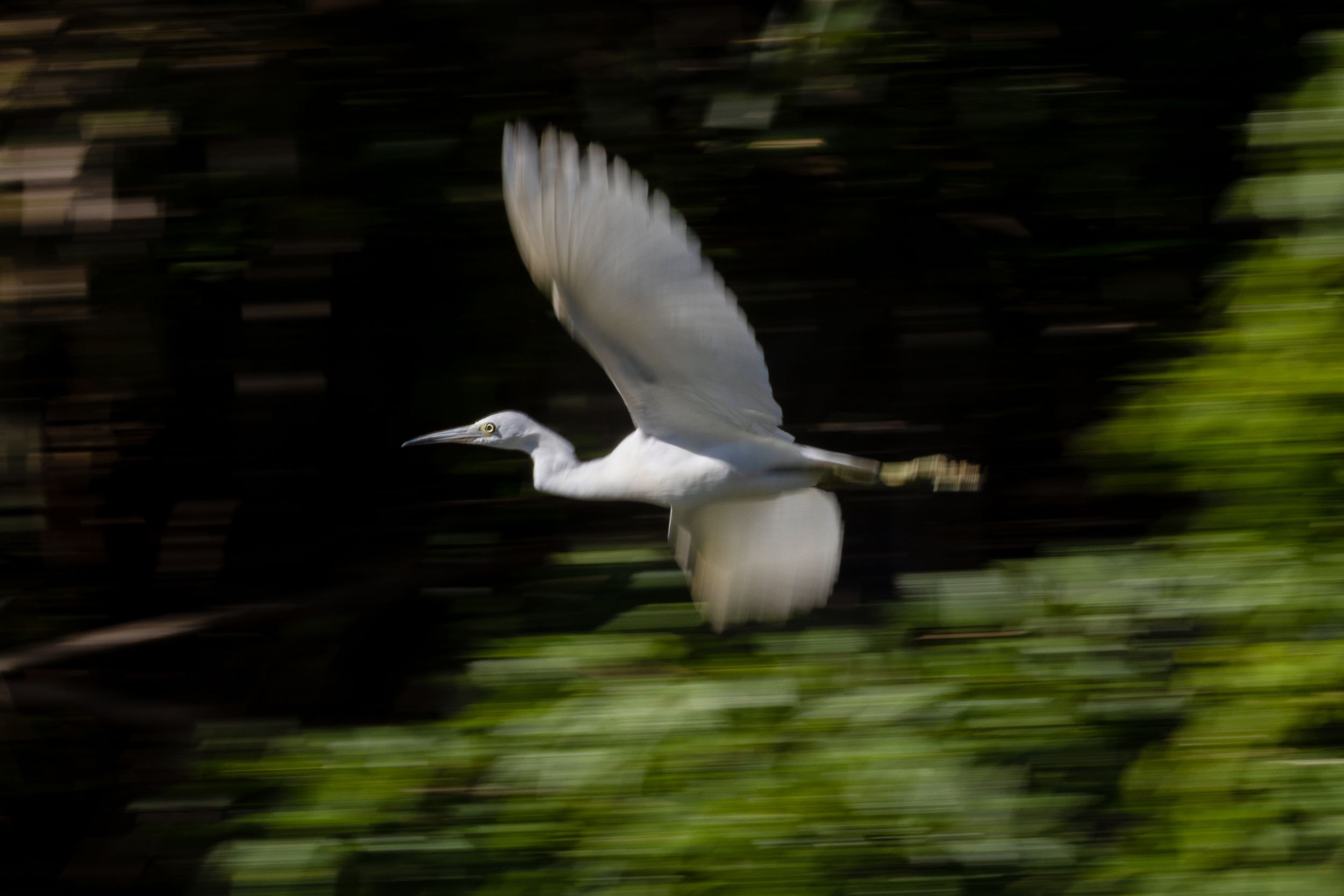 Tortuguero is a must-visit location for any bird lover, and will not disappoint anyone after some fast-paced and dynamic wildlife photography. And the immaculate ecolodge and its fantastic food sure don’t hurt either. Ben Blankenship
Ben Blankenship was born in Nashville, Tennessee. As a young man, he studied ceramics and fine arts. In college, he pursued filmmaking, writing, and photography. After graduation, he worked for nearly a decade in broadcast television as a video editor, photographer, and cinematographer. Over the last several years, he has transitioned into working full-time as a photojournalist and travel photographer. He has worked abroad in Costa Rica, Belize, and Uganda. His photographic passions include wildlife, conservation, travel, events, and documenting social and political events around the world. His work has been published in the New York Times, The Oregonian Newspaper, and by Photographers Without Borders. He currently splits his time between living in Costa Rica and Tennessee. See his most recent work on his website here: www.ben-blankenship.com